Silk weaving in Cambodia: An age-old tradition struggles to survive

Cambodia has a long and rich history in silk production and weaving dating back more than a thousand years. Women across southern Cambodia have looms in their homes, and they practice the art passed down from their mothers and grandmothers.

Cambodia has a long and rich history in silk production and weaving dating back more than a thousand years. Women across southern Cambodia have looms in their homes, and they practice the art passed down from their mothers and grandmothers. But now the ancient craft is slowly dying as the cost of imported raw silk continues to climb while the price of finished silk textiles drops.

Silk weaving has been part of Cambodia culture for centuries. At Angkor Wat, the ancient temple complex built in the early 12th century, images of women wearing traditional silk garments that are still worn today are carved in bas-relief. Zhou Daguan, a Chinese diplomat who visited Cambodia in the 13th century wrote, in one of the only first-hand accounts of the Angkor empire, about immigrants from Siam raising mulberry trees and silkworms to feed the thriving silk trade. Raw silk was one of Cambodia’s main exports to China during this period.

Now, however, the Cambodian silk industry relies on China and Vietnam for most of its raw silk. The Khmer Rouge era decimated the mulberry tree population which are the exclusive foodstuffs of silkworms. Before the Khmer Rouge took power, Cambodia was producing an estimated 150,000 kilograms of silk per year. That number dropped to just 800 kilograms after years of political and civil unrest.

At MAXIMA Mikroheranhvatho, we have given nearly 900 Kiva loans to weavers, most of them working in the silk industry. But many of them are now abandoning the craft. The price of imported raw silk has been rising steadily–prices have gone up 60% in the last year. At the same time weavers are paid less than ever; the prices for finished products have fallen 56%. Silk weavers are now working extremely close to the margins–or even at a loss–and many of the 20,000 estimated weavers in the country are trying to find other work.

During my fellowship I met with many weavers, and saw even more abandon their trade in favor of working in garment factories. There are a couple of islands in the Mekong outside of Phnom Penh where most of the women living there are weavers. I visited the most famous of these islands, Koh Dach, and at house after house saw abandoned looms being used to hang laundry. 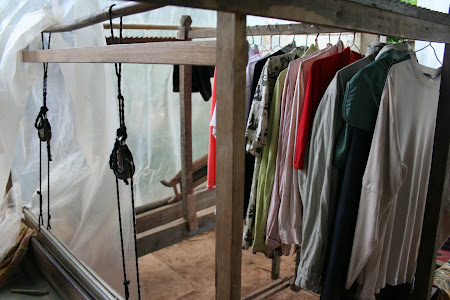 55 year old Ny told me that the women of her family have been weaving for generations, since “ancient times.” She taught her five children to weave, including her three sons. But when I asked why her loom was dismantled and now being used to prop up a bicycle she explained that it just wasn’t lucrative enough anymore, and that she had switched to farming vegetables. She’s kept the loom rather than selling it in the hopes that she will be able to start weaving again in the future.

Most weavers in Cambodia are women–the craft is passed down from mother to daughter. They usually start weaving when they are in their early teens and continue until their eyes give out. Many of them are subsistence farmers during the rice season, and most have one or two looms set up in houses that lack running water.

I met a young woman, Sinet, who at 20 had been weaving for 6 years like her mother before her. However, because her income has dropped precipitously, she was reluctantly considering abandoning weaving and looking for decidedly less-skilled work at a garment factory, one of the only sources of reliable income for young rural women. Although the garment factories provide a steady paycheck, they are also known for forced overtime, low pay and sweatshop-like conditions.

The Cambodian government is aware of the challenges that the silk industry is now facing, and in response recently suspended all import taxes and value-added tax for silk imports to help keep down the spiraling cost of silk. In addition to lowering the costs of silk imports, the government also recognizes the importance of making locally cultivated silk available to weavers and has tried to encourage farmers to begin growing mulberry trees, the main source of food for silkworms.

The process is a slow one, however. Propagating mulberry trees is not difficult, but many Cambodian farmers prefer to go with more secure crops such as cassava. Last year the United Nations financed a project to help create a silkworm production center here but Cambodia still only produces only 2% of the thread used by its weavers, who continue to rely on silk imports. 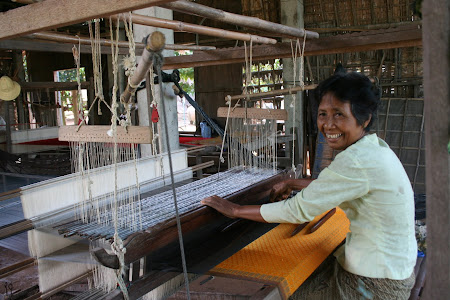 Despite declining profits and overwhelming obstacles, many weavers say they cannot imagine leaving a profession that they have worked at for so long. Khon Phum (pictured above) has been weaving since she was a teenager, and now, at 62, her beautifully detailed work attests to her expertise at the craft. She said that weaving has been her livelihood and her identity for nearly fifty years.

We talked about the difficulties the industry is currently facing and I asked her if she had considered doing anything else. Phum seemed to find the idea of finding another type of work absurd and said that despite the challenges she faces, she, like many other weavers in Cambodia, will continue weaving.

Lina Goldberg recently finished her Kiva Fellowship at MAXIMA Mikroheranhvatho Co. Ltd. in Phnom Penh, Cambodia. She plans to stay in Cambodia working on other projects and just generally being Lina Goldberg.

Happiness And Profit Are Synergistic Ram and the Rawan Hatha

Join Our Community!
By signing up for our community, you will be able to follow along with our story,  new hand-crafted creations and  the stories of those who made them.  By supporting The Blue Atlas Project, you are empowering economic independence for people around the world.
X